. . . Those words sum up how many Mexicans feel about their country. Full of pride, full of love, full of respect for their country, in times past and still now, people refer to the country as México Lindo. In June 2007, I got the opportunity to live in my family’s native country while studying and taking college courses applicable to my major. It was my first taste of traveling abroad, even though it was just to a neighboring country of the U.S.  However, neighbor or not, there is a world of difference between these two countries and I witnessed much of these differences firsthand on my 2.5 months down south/south of the border/en el sur del continente.

Although I had been to México about 4 times already for various family vacations in different parts of the country, this particular visit and extended stay in 2007 was like none of my visits before. I was a college student afterall, and this trip was the assertion of my independence (you know, or as independent as I could be while staying with extended family I had in Guadalajara, México). I stayed in a home with my tios, some primos and their kids just a short 20 minute drive from the program’s Universidad Jesuita de Guadalajara: ITESO. I chose to stay with family over a random homestay because #1, I would be saving money (to spend on travel later) and #2, I would be quite comfortable and taken care of in my family’s capable hands (my stomach would be well taken care of by their cooking TOO).*** Sorry in Advance: this blog post won’t have pictures of mouth-watering Mexican dishes and foods as this was 5 years before I had an I-phone, before Instagram, before taking dozens of pictures of food was cool or interesting; this was 2007.

It really was the best decision I have ever made as a young adult, to remove myself from familiarity and comfort in California and journey somewhere familiar and yet unfamiliar. That’s a contradiction, I know, but it’s 100% the case. México was close to my heart, but not part of my soul before this visit. I knew Spanish from speaking with my grandparents, all four of which lived in neighborhoods close by to home in Los Angeles. I even took advanced courses and Native Spanish speaking courses all throughout high school (which was terrifying at first because I really felt I was NOT a true native speaker). Point being, I could speak and understand Spanish, and communication in a Foreign Country is such an advantage; it’s quite important. I felt lucky, I felt blessed to be getting a taste of college life at a prestigious University in México. Now, applying my Spanish every day in the country and at school was still challenging. I have a slight accent speaking Spanish, and if I get nervous the words don’t come to me as easily, nor the correct grammatical tenses at times. Se nota que tengo un poco de acento cuando hablo español y a veces cuando me pongo nerviosa las palabras y los tiempos gramaticales no me vienen tan facilmente. All things considered, there still was no better place for me to be that summer than México.

Our program was designed so that we had extended weekends free to travel around the country at will, at an extra co$t for us, but well worth it. Weekend 1, the program offered a trip to the capital, la Ciudad de México, by bus. A large group of us jumped at the chance, for many reasons, the main one probably for the chance to visit TEOTIHUACAN. Are you familiar with this place? Sounds like a mouthful doesn’t it? That’s in Mexico City you say? En el D.F.? 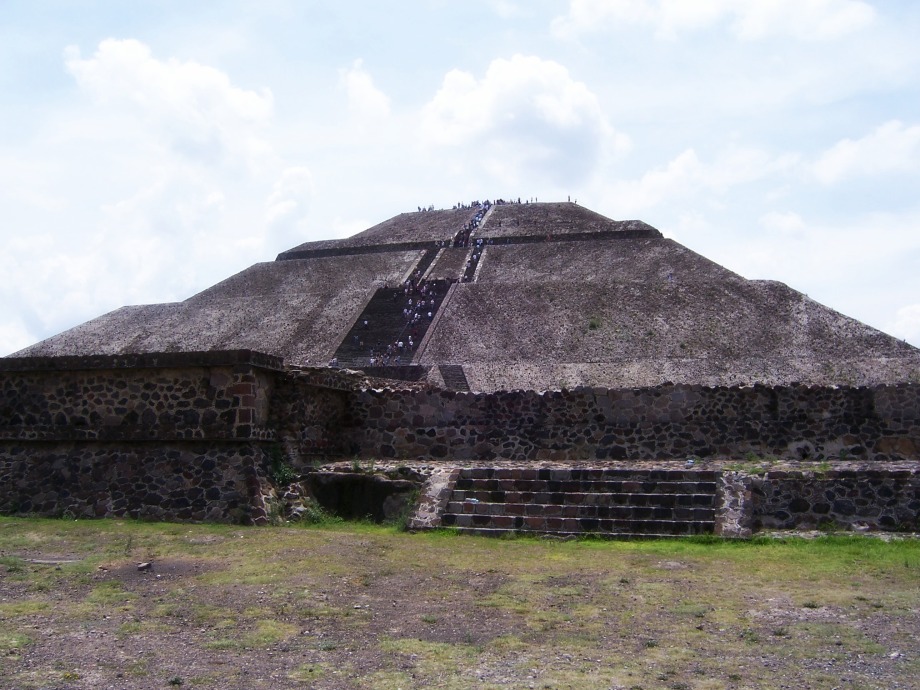 Staring down the massive pirámide del Sol (Pyramid of the Sun)

Why yes, and no, just outside of el D.F. (approx. 30 miles outside). Teōtīhuacān, which means “place where gods were born”, was the name given to the land by the Nahuatl-speaking Aztecs many centuries after the demise of the civilization. It is fascinating to think that the people that built such an amazing city remain unknown. Even the real name of the city is unknown. There is a lot of speculation surrounding which ancient people constructed the massive structures and marvels, but that makes them all the more interesting and mysterious. Nobody knows for certain. What we do know is that the city was established and the monuments built between 300 B.C. and 250 AD. Their population is estimated to have reached 150,000 inhabitants, although some say it was closer to 250,000. We also know that the city was powerful enough to have influenced or ruled all the way down south to Guatemala.

This civilization was vast, complex, intelligent and yet in the 7th century “disappeared”. Well, we don’t know if they disappeared exactly, but the entire city was burned and destroyed at that time. The Aztecs found it centuries later and became its new inhabitants. Again, many theories exist to try to explain what happened. Even great civilizations fall, or fail. This is just one example. What you will get from visiting this unique place, Teotihuacan, (besides a sense of time travel) is a HIGH.  Time Travel and a High?  Now don’t you all go running over to México at once.  During my experience, I felt like I was seeing something incredibly ancient, so well built, so precise, and yet so spiritual. 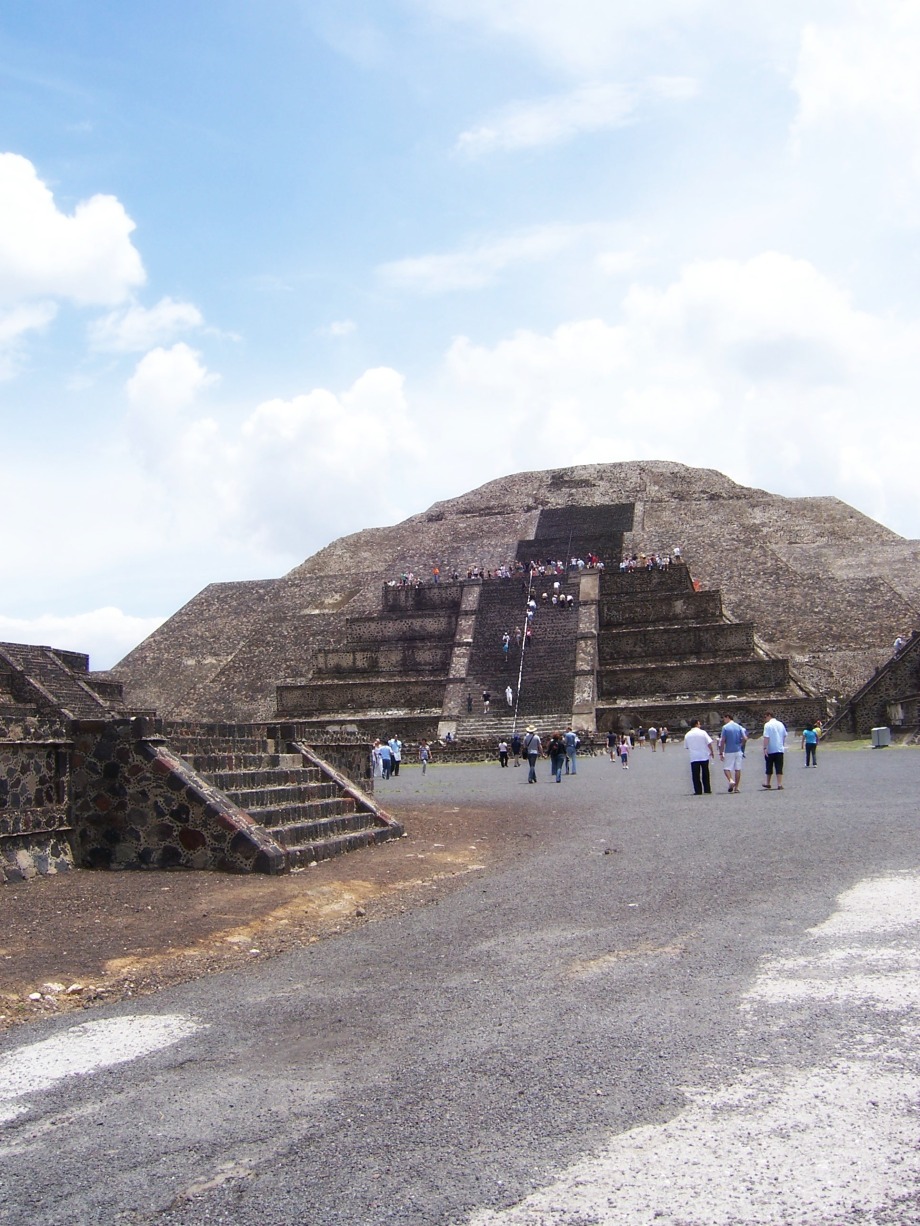 I felt alive. I felt like every breath was pure and true. I also felt a connection to something; maybe a real connection to my country, or perhaps I just felt connected to the land and to the ancient souls that I felt through the wind.

Standing at the top of the Pyramid of the Sun I was without words. I felt a strong energy and the sun beaming down on me even through the overcast that day. (How appropriate) As far as the eye could see, there was beauty. I could have stayed atop that structure for a long time, had it not been for the slight fear of the climbing back down some 250+ stairs. No biggie. And we also had the second pyramid to climb after this first one. 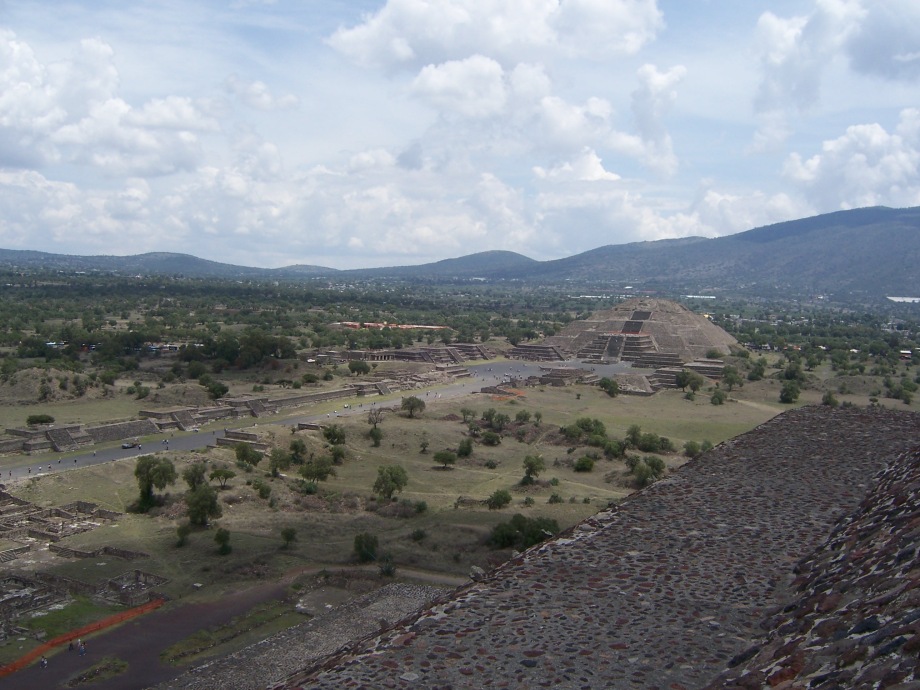 What a perfect day. What a perfect visit. What better way to feel alive than to climb a structure built so long ago? Although, in reflecting I bet the ancient people never expected us to ever be touring their city in a such a way, and for that I say perdón. México City had a lot more to offer us and I hope to write and give some insight about some of the other gems of both the capital and other cities I visited around the country.

I have heard so many things about México over the years since my extended visit in 2007. My last trip to México was in 2012 in fact, a quick visit to meet up with family and eat some great food and relax. Even that visit seems like such a long time ago, perhaps because I have begun traveling to other new parts of the world for me (like Perú, Costa Rica, & Ireland), or maybe I have allowed both the Media and fear prevent me from returning to México. Suddenly, I am not that bright-eyed 19 year old who fell in love with discovering her roots and seeing a new part of the world.

For some time now I have been that someone in search of their roots, curious to a fault, wondering how it is that both of my parents and some of their parents were born in Los Angeles California, even though we are all Mexicanos? Plain and simple, THE BORDERS were almost non-existent in those times. Mexicans travelled to and through the United States for work all the time. My great-grandparents did. Los mexicanos viajaban hacia los Estados Unidos y dentro de los EE.UU. para trabajar todo el tiempo. Mis bisabuelos también hicieron esto.

The Border between the 2 countries was a formality, not a “Barrier”. Were it not for this, I may not have ever been born in California, a United States citizen by my birthright. Maybe I would have never been born at all.

Recently I have been watching travel TV episodes focusing on parts of México where they highlight some places it is safe to travel to, and others where drug wars and serious Death tolls on the rise have made for an inhospitable tourist destination.  On Anthony Bourdain/CNN’s Parts Unknown and Travel Channel’s Breaking Borders, some serious issues are discussed showing my beautiful country of heritage as a messed up place, a haven for drugs, death and demise. Why you might ask? Why is it so dangerous? I don’t know nearly enough as I should, but I will say that my heart hurts for México. Too many greedy people in power, Too much money to be made, And yes, that means America too. The U.S. is deeply involved in the issues, as there is much money to be made in exploiting its neighboring country.

If México isn’t talked about as the scary and dangerous country down south, it is known as that Paaaaarrrrrty Place. It pains me that people only know México as that place where Cancun is. Or where Cabo is. Isn’t everything included in the resorts? Like unlimited margaritas and piña coladas? “Man I LOVE Mex-i-co Bro. I have partied there in my day bro.”

México is such a historically rich country. History is everywhere. The Spanish conquered and really left their mark on many Mexican cities. There are some beautiful colonial cities and towns you can get lost in, but the ones that showcase the rich cultures and ingenuity of the Native people of the land… from early centuries (100 B.C. or so) como bella Teotihuacan, it is these places that should be known, visited, appreciated, & respected. I have so much respect for these lands, for this rich country and its complex history. I am not nearly finished with México. I hope to travel across the country in the years to come and see and discover more about the diverse country. I hope to document my trip. I hope to explore my roots and love my journey. I really pray I will have this chance, México Lindo.

I AM A WOMAN; FROM CALIFORNIA; OF MEXICAN AMERICAN DESCENT; EDUCATED; CREATIVE; FUNNY; SPANISH SPEAKER; SPANGLISH SPEAKER; FILM LOVER; WORD LOVER; CURLY BIG HAIR (YOU'LL SEE). CURIOSITY IS WHAT MOTIVATES ME. MY HEART IS BIG ENOUGH AND MY MIND OPEN ENOUGH TO LIVE THE GREATEST ADVENTURES NOW AND FOR AS LONG I WALK THIS EARTH . . . I WANT TO SEE, TASTE, SMELL, TOUCH, BREATHE, AND LIVE A MORE FULFILLED LIFE BY TRAVELING EL MUNDO, LEARNING NEW LANGUAGES, AND EXPERIENCING TRUE GROWTH EVERY STEP OF THE WAY. . .AND I'M NOT WAITING FOR THESE OPPORTUNITIES TO COME, BUT INSTEAD ACTIVELY SEEKING, AND CREATING MY TIME...